Monday saw me on an early train to Wellington, Shropshire to facilitate Bridge’s staff and trustee ‘Visioning’ away day. It was a fairly short notice piece of work for me, but made much more possible by the clear brief and draft agenda Bridges’ co-ordinator provided. The real pleasure about this job was that using participatory tools wasn’t an option, it was right there in the brief.

Bridges themselves work with schools and community groups using participatory methods like Philosophical Enquiry (or P4C as it’s sometimes known). We didn’t use P4C on the day, though it’s something I’ll be exploring for the future. However we did use a host of other participatory methods, including de Bono’s six thinking hats. I also took the idea of local radio interviews, which I recently used in a strategy training and tweaked it to help the group explore differing stakeholder perspectives of their work. Add to that a highly entertaining session called History of the Future and we were ensured an energetic day together. 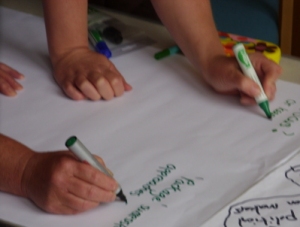 Sadly the end point was, as is often the case, too ambitious. I don’t believe in creating unrealistic expectations, so I levelled with the group right at the start – whilst we’d try our best I doubted we’d get as far as they were hoping to. I’d already had that conversation with Davina, the co-ordinator.

I’ve written before about the challenges of undertaking work like this in just one day. It’s a source of endless frustration to me that fantastic organisations like Bridges simply don’t have the resources to be able to give these processes the time they really take and they’re left using other means to finish off processes and finalise important decisions. This is something I’ll be thinking about more. If I come to any conclusions I’ll share them here. If you have thoughts, I’d love to hear them.

One very basic piece of learning from this, for me, is that it’s far more intelligent to plan the process for finalising the work before the day begins. Towards the end of the day, when everyone’s brain is beginning to ache from such concentrated creative exertion, is not the best time to have to improvise a system for collaborating on creating near-final draft documents, taking the final decisions, and communicating the outcomes to the group. But that feels a little like working on the assumption of failure. Bridges will be using online collaborative tools.

Even though we didn’t reach the end point the group were hoping for, they enjoyed and valued the day. The were very complimentary about the choice of tools we used across the day, and appreciated the rare opportunity to engage with each other and get to hear each other’s viewpoints. The negatives were mainly to do with time: “not enough hours in the day”. There was a comment about the collecting of thoughts on what Bridges overarching vision might be – that the board with post-it notes on it was a “visual mess”. Fair point – had we had longer I would have moved on to break the emerging themes up more cleanly. We had to stop and move on to ensure a system was in place to finalise the work. However, it’s still not appropriate for the final mental ‘snapshot’ to be a confusing one, especially when tidying it up is the work of minutes. The last word from Davina:

Everyone in the office is very pleased with how the day went, myself included. One of our Trustees was very quick to praise your skills – and is often quick to find fault