Students discuss nonviolence using a 'spectrum line'. As the photo illustrates there was a wide range of opinion

Last night’s workshop went well. Over 20 energetic, thoughtful and committed students came to share their views and experiences of nonviolent direct action, and to build on their knowledge and skills. The workshop was moved to the building currently occupied by students as part of their protest against cuts. A fitting venue.

We explored what people felt made actions effective, stimulated by images of actions of many kinds from the UK and elsewhere. We debated nonviolence – if an action caused anyone any distress was that violent? Was intention the key to our actions being nonviolent? Many seemed to feel that was the case. For some, some actions like damaging property (cutting through a fence, for example) were inherently violent but could still be acceptable if the wider intention was a noble one.

We also looked at some practical aspects of taking action. Using hassle line roleplays we explored interactions with the police which threw up as many questions as they answered. How come many of nonviolent tactics such as linking arms and sitting down left those in the role of police officers feeling more frustrated, even angry and therefore more likely to use force? Was that still nonviolence? 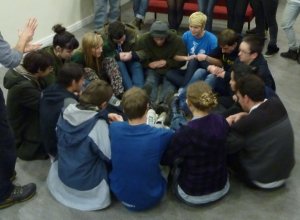 Practicing holding space using a circle of linked bodies. There was much debate over facing in or out...

Two lines, using their legs to form a strong blockade

We then ‘occupied’ an area of the building and looked at techniques that offered the best support, communication, and feeling of strength in the face of the threat of removal.

Finally we spent some time looking at legal rights – what actions could trigger arrest? What might you be arrested for? What might the consequences of that arrest be?

As an aside, one participant commented on how easy they had it – they hadn’t been aware that there was so much the police could find to charge them with if they felt like it. Interesting in the light of today’s power and privilege post. Do university students have more power to protest and take action? If so, let’s hope we see them using it! The group left to head to the pub and talk about their next steps…