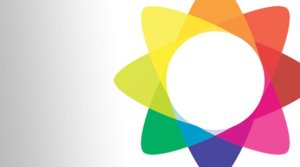 In our last post on consensus we talked about near-consensus alternatives.

Here’s the first in a series of posts that explore near-consensus alternatives. By near-consensus, I simply mean methods that share some of consensus’ analysis if the problems of traditional majoritarian decision-making and are trying to explore ways to deepen dialogue and produce results that work for a larger section of participants.

So let’s look at Crowd Wise. I’ll be co-facilitating a course with Perry Walker, originator of Crowd Wise, in the near future, so Crowd Wise seemed like a good place to start

How did Crowd Wise evolve?

PW: Six or seven years ago, I met Peter Emerson of the de Borda Institute, based in Belfast. For thirty years, Peter has single-handedly flown the flag for consensus voting, which is the type of voting used in Crowd Wise. This form of voting involves people putting a series of options in order of preference. Those preferences are then turned into points. If there are six options, and you vote for all of them, your first preference gets six points, your second preference gets five points, and so on. At that stage, I had a sense that there was a really interesting approach in what Peter was doing, but I couldn’t work out what it was. Peter and I managed to get a grant from the Joseph Rowntree Charitable Trust , and I then got a further grant from the Democratic Innovation Fund of the Ministry of Justice. This enabled us to run a number of trials. I slowly realised that while the consensus voting seemed very powerful, the way in which Peter incorporated it into an overall process did not work for me. So I gradually stripped that away and built my own process around the method of voting. I used to have a postcard that said, “I’ve learned so much from my mistakes that I think I’ll make another one”. Fortunately, I managed to make enough mistakes in these trials that I was able to work out how to help others avoid them. A process that felt right slowly emerged, and that process is Crowd Wise.

Crowd Wise is consensus voting, but many proponents of consensus see voting as its antithesis. Tell us more….

PW: I wouldn’t say that Crowd Wise is consensus voting. Consensus voting is the form of voting that Crowd Wise uses. Crowd Wise also involves discussion – or ‘deliberation’, to be a bit more technical. Now the voting and the deliberation are closely entwined. People who disagree with each other nonetheless have an incentive to talk to each other. The proponent of a particular option will seek to persuade the other person to give that option a higher preference in the consensus vote than they originally intended to. Indeed, the form of voting means that people who disagree may have more of an incentive to talk to each other than people who agree. And that same incentive also encourages that talk to be constructive.

I understand the incentive to talk to someone to persuade them of my argument. But what’s the incentive to listen to theirs? Many people would assert that that’s not the norm in argument and debate within our culture. Why does Crowd Wise foster a constructive response?

PW: I’m supposing that everyone wants to advance their preferences. So everyone wants to influence people who support options different to those that they prefer. And I think most people accept that it’s a good thing to listen to somebody, when you want that person to listen to you! Saying all that enables me to respond to the second part of the statement. When ‘proponents of consensus’ describe voting as the antithesis of consensus, what they have in mind is majority voting, known in British politics at First Past the Post. Now, because this is by far the best known form of voting, people tend to equate it with voting as a whole. The Seeds for Change website, for example, says “voting creates a majority and a minority – a situation in which there are winners and losers”, and only remembers to qualify this system of voting as majority voting in the next paragraph. In sum, then, I entirely agree with proponents of consensus that majority voting is the antithesis of consensus. But rather than conclude that all forms of voting are to be avoided, I have discovered a form of voting that does not have the drawbacks of majority voting.

What are the main similarities and differences between Crowd Wise and consensus as it’s used in many non-hierarchical activist networks?

PW: Doing a little bit of research for this interview, I have been struck by the extent of the differences. The end, in terms of reaching general agreement, is pretty much the same, but the means are very different. I see that the Rhizome website is happy to use the Wikipedia explanation of consensus decision-making, so let’s go with that. Wikipedia says that:

“The basic model involves collaboratively generating a proposal, identifying unsatisfied concerns, and then modifying the proposal to generate as much agreement as possible. After a concerted attempt at generating full agreement, the group can then apply its final decision rule to determine if the existing level of agreement is sufficient to finalize a decision.”

The differences with Crowd Wise begin right at the start of this basic model. Crowd Wise starts with a range of options, with six a typical number. In addition, the ways in which these options are generated vary a great deal. At AFC Wimbledon, the options were generated by a working group of twelve or so, drawn from a much larger electorate of the 1500 members who own the club. At an event in 2009 at the University of Gloucestershire, the six options were generated in advance by people who were not part of the summer school for whom the event was held. Now it is true that Crowd Wise involves looking at concerns, but the way in which this happens is different from traditional consensus decision-making. In the case of the University of Gloucestershire event, which was about the future powers of parish and town councils, these concerns were identified by the proponents of the various options, who then amended their options to make them more appealing to the electorate.

Furthermore, in Crowd Wise, there is no question of an individual blocking a proposal, or even standing aside. For the way in which people formally give their view is by voting, and the most hostile they can be to any option is to rank all the options, and to put it last. You could of course devise a voting system that allowed people to express the strength of their opinion, whether in favour of their best option or against their worst option. But what you would then lose would be the incentive for people who disagree to talk to each other.

There is another difference where Crowd Wise could be at a disadvantage. This has to do with the decision rule. The possible decision rules for traditional consensus decision-making seem to be pretty clear. The conclusions to be drawn from the final consensus vote (usually the second vote, sometimes the first) are not always as clear. Sometimes they are.

In 2010 I ran an event for Transition Town Lewes (TTL), which wanted to select a new governance structure. The two options that came top, well ahead of the rest, were very similar. Both involved setting up a Steering Group which initially comprised the contacts for their existing working groups, and then invited other members of TTL to put themselves forwards. They differed slightly in how people to join the steering group were chosen from among the people offering themselves. It was an easy decision for TTL to decide to combine those two options. By contrast, the six options used by AFC Wimbledon were all stories about how the club could evolve. I was asked to interpret the voting results to work out which strategic criteria took priority. I said that the main conclusions were:

“There was a strong desire to retain ownership by the fans. This applied to the ground as well as the club. There was a desire to get back to Merton (the London borough that was home to the original Wimbledon club), with Kingston (where the club are now) in particular and south west London in general as acceptable but second best. Wimbledon fans are cautiously ambitious. They do not want ambition to jeopardise fan-ownership, and balance it against the wish to return to Wimbledon or Merton.”

In other cases, the interpretation relates more to the mathematics of the voting. With majority voting, it is at least clear who has a majority. With consensus voting, there is no rule that tells you what score by the option that comes top, or combination of scores, is good enough. It’s a question of feel. I have never found that to be a problem, but it could be, especially in situations of conflict.

The final difference relates to ethos. Consensus decision making as usually understood puts stress on having a shared ethos, on the importance of the common good, of listening, and so on. I have never found it necessary to emphasise any of these points with Crowd Wise.

Because they happen naturally or because Crowd Wise has different foundations?

PW: I hope because they happen naturally. I gave reasons why I thought people would listen to each other above. But I am probably being a little naïve. I am sure that there are settings where the extent of conflict or the nature of the participants, say where they simply want to maintain their initial position, means that these things do not happen naturally and need to be encouraged. Furthermore, in a way that I do not yet fully understand, it is the desire of the supporters of the different options to win the vote, to have their option come top, that fuels the identification of consensus.

That sounds counter-intuitive, and you say you don’t fully understand it, but is there any more you can say at this stage? 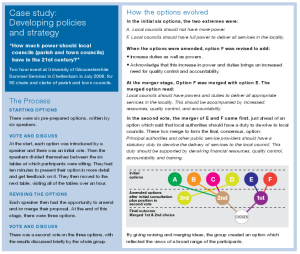 . In this case, the proponents of the different options adapted their options, after talking to the 60 members of the audience (the electorate) in ways in which made the options closer together. That in turn may have paved the way for five out of the six proponents deciding that they would do better in the vote, and not sacrifice anything fundamental, if they merged their preferred option with other options.

Now, it may be the case, that if the make-up of the audience had been different – very polarised for example – that the options would not have evolved in this way. But I have not had any examples of that happening in any of the fifteen or so events and projects using Crowd Wise that I have run so far.

Where does Crowd Wise get results when other forms of consensus don’t?

Read our other posts on consensus