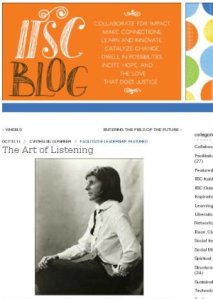 Thanks to the folk at the Interaction Institute for their post The Art of Listening. They quote extensively from an essay on the power of listening by Brenda Ueland.

In facilitation and group work circles listening is more than a core skill, it’s a core state of mind, but one that’s often undervalued and under-practiced. Ueland’s essay focuses on listening in a family and social context, but what if we shifted it to a meeting context and particularly a consensus decision-making meeting?

“when I went to a party, I would think anxiously: “Now try hard. Be lively. Say bright things. Talk. Don’t let down.” And when tired, I would have to drink a lot of coffee to keep this up.
Now before going to a party, I just tell myself to listen with affection to anyone who talks to me, to be in their shoes when they talk; to try to know them without my mind pressing against theirs, or arguing, or changing the subject.
Sometimes, of course, I cannot listen as well as others. But when I have this listening power, people crowd around and their heads keep turning to me as though irresistibly pulled. By listening I have started up their creative fountain. I do them good.

For just as the tragedy of parents and children is not listening, so it is of husbands and wives. If they disagree they begin to shout louder and louder – if not actually, at least inwardly – hanging fiercely and deafly onto their own ideas, instead of listening and becoming quieter and more comprehending.

But the most serious result of not listening is that worst thing in the world, boredom; for it is really the death of love. It seals people off from each other more than any other thing…

Sound familiar? And not just to the parents and partners out there. It sounds like many meetings I’ve been to. Can we really afford to seal ourselves off from one another? What impact does that have on our ability to come together and consent on important decisions?

…When we listen to people there is an alternating current that recharges us so we never get tired of each other. We are constantly being re-created.
Now, there are brilliant people who cannot listen much. They have no ingoing wires on their apparatus. They are entertaining, but exhausting, too.
I think it is because these lecturers, these brilliant performers, by not giving us a chance to talk, do not let this little creative fountain inside us begin to spring and cast up new thoughts and unexpected laughter and wisdom.

Activist meetings are full of charismatic and brilliant people who seemingly cannot listen. I think their ability to perform well – to come with a constant supply of good ideas, incisive analysis and the ability to convey both clearly – becomes an self-reinforcing excuse not to listen. Their dominance means that when they do pause for breath the short silence is rarely filled with (in their judgment) equally creative and incisive thought. Or it’s simply filled by another brilliant person lacking ingoing wires. They roll their eyes and think “I better say some more or this campaign will never happen”. The end result is the same though – they stifle the creativity in others and create a downward spiral in the majority of the group who are consigned to the role of increasingly passive spectator.

Now, how to listen. It is harder than you think. Creative listeners are those who want you to be recklessly yourself, even at your very worst, even vituperative, bad-tempered. They are laughing and just delighted with any manifestation of yourself, bad or good. For true listeners know that if you are bad-tempered it does not mean that you are always so. They don’t love you just when you are nice; they love all of you.

In order to listen, here are some suggestions: Try to learn tranquility, to live in the present a part of the time every day. Sometimes say to yourself: “Now. What is happening now? This friend is talking. I am quiet. There is endless time. I hear it, every word.” Then suddenly you begin to hear not only what people are saying, but also what they are trying to say, and you sense the whole truth about them. And you sense existence, not piecemeal, not this object and that, but as a translucent whole.

Then watch your self-assertiveness. And give it up. Remember, it is not enough just to will to listen to people. One must really listen. Only then does the magic begin.

Think about it…. treating each and every contributor to a meeting as if there were endless time to hear, digest and understand every word. Being curious. Looking for the whole truth in what they are saying, in who they are. Really listening.

I’m lucky enough to have had moments  that seemed genuinely magical in consensus-based groups, some of which happened because we finally heard each other despite our best efforts otherwise. Those moments keep me going through the mundane meetings and the horrendous meetings. What if we could work to make ‘magic’ a regular part of our meetings?

The challenge in the essay is obvious – listen deeply and genuinely and start doing it now. The reality feels more difficult. “No-one else at the meeting seems to be listening, why should I?”. “If I listen will my own perspective get heard?”. But what choice do we have? If we want groups that can actually make powerful change we need to make powerful changes in the way we interact. If we want those groups to be the cornerstone of entire movements we have to grasp the nettle and build foundations that will stand the weight. Too many other groups have tried and failed for lack of attention to things as simple as listening (and the valuing of difference and diversity that it enshrines). Time is short and we can’t afford to fail too many more times.

4 thoughts on “Are you listening?”