Last year saw the publication of Tim Gee’s book Counterpower: Making Change Happen. We asked him to share his thoughts on the blog and here they are:

Why write the book now? Does the timing reflect your observations about the state of the social movements right now?
I began researching the book a few days after the 2009 G20 Protests in London, and the conclusion was written in response to the debates that followed the TUC march and associated protests in March 2011. Its publication almost exactly corresponded with the occupation of St Pauls. None of that was planned, but it reflects what the movement – and I as part of it – was doing.

Tell us about Counterpower – what’s your core thesis?
The power of any regime rests three main things –ideas (the ability to persuade us of their right to rule), economics (the ability to extract land, labour and capital from us) and physical coercion (the ability to punish us if we do not obey). If a movement can seriously challenge those facets of power, then elites will give away whatever concessions that they have to in order to maintain their rule – and so campaigns are won. If the movement is strong enough it can topple regimes altogether – hence the argument that a successful campaign is an unfinished revolution. The ability to remove the power of elites is our Counterpower.

What’s the most important message you’d like current or future campaigns to take away from the book?
I’d like to burst the myth that policy-making is a process whereby wise elites find the best solution for the most people. On the whole government policy is a reflection of the balance of power in society. Therefore for real social change we need to change the power balance. Simply designing good ideas and communicating them isn’t enough.

It’s relatively easy to analyse movements in hindsight, but did you get a sense through your research that the most successful ones planned their strategies and actually had an analysis at the time, or were they subject to wider events, to fortune?
Almost all of them had strategies and analysis, but it was often things not in the strategy that made all the difference. Take Indian Independence for example: Gandhi’s strategies have been much celebrated since, and were indeed central to bringing down the colonial regime. But India won its independence nearly 20 years after the Salt March. The last straw had been the mutinies in the army and navy in 1946, which were actually condemned by the Indian National Congress, as well as the Muslim League.

Many movements have grown in strength because of specific key events. Do you think that successful movements create these trigger events or just exploit the ones that happen anyway?
Trigger events are times when mass change can happen, because societies often need to be disorganised before they can be reorganised. But what direction that change takes is up to the agency of different forces in society and the actions and planning of the movement beforehand. This is reflected in the different changes that took place around the First World War. In Britain it was a trigger event for the extension of the franchise to women. In Germany and in Russia it was a trigger event for the downfall of the Kaiser and the Tsar respectively. But such events do not only lead to the redistribution of power. As Naomi Klein shows in The Shock Doctrine, the neoliberal right has in recent times been quite adept at using such moments to further consolidate power with the few.

Sometimes though, movements can create those moments, albeit on a smaller scale. As Martin Luther King put it in his Letter from a Birmingham Jail ‘We who engage in nonviolent direct action are not the creators of tension. We merely bring to the surface the hidden tension that is already alive’. That can certainly be seen in some of the key events of the anti apartheid struggle. For example, following the nonviolent Defiance Campaign in South Africa in 1952 the ANC increased its membership fivefold, even though the uprising was crushed in the short term.

What role can the kind of support that we at Rhizome, and many other folk around the world, play?
The work of trainers and facilitators in social movements is often unsung in the official histories, and many names have been forgotten – probably at least in part because of a natural instinct of such people to push others to the fore. Nevertheless the pioneering work of the likes of Paulo Freire, Saul Alinsky, Bill Moyer, George Lakey, Gene Sharp (and his colleagues) and James Lawson is worthwhile reading for any movement tactician, and is reflected on in Counterpower. All of them have been central to analysing the dynamics of power, identifying ways that it can be dissipated, then supporting people to have the confidence and skills to do so.

Do you think there are key moments where that support can best be concentrated?
The book lays out a four stage model of movements – Consciousness, Coordination, Confrontation and Consolidation. Ultimately I think you need different kinds of support at different times. So conscientisation along the Frierian model is most useful at the first stage, community organising at the second stage, direct action at the third stage and then dealing with fall-out at the fourth.

Many of the successful revolutionary movements you cite in Counterpower have overcome significant repression. Do you think that there needs to be a high level of explicit repression before a revolution can take place?

Movements are born because of repression – usually in covert economic form. In general movements are overtly repressed only when they have started being successful. Therefore resilience to repression will be a factor of many successful campaigns.

In Waging Nonviolent Struggle Gene Sharp talks about the use of Political Ju Jitsu – that is, causing the attacker to lose balance as a result of their own forward thrust. There are plenty of examples of repressive responses by governments backfiring against them – for example the police response to the Reform protests of the 1860s was what led to the resignation of the Home Secretary and then the passing of the second Reform Act in 1867. But the long struggle for the vote in Britain also shows that government repression can delay reform for years on end – as in the case of the 1794 treason trials, the 1819 Peterloo Massacre, and the brutal response to the Chartists and others in the general strike of 1842.

So we don’t need to live in an explicit dictatorship for injustice to become so unbearable that it leads to revolution? Is a “European Spring” a possibility?
I see a revolution as any process that redistributes power from the haves to the have-nots. In most European countries there is a dictatorship of corporate power. So I  think it’s worth a go…

Watch an interview with Tim courtesy of London Indymedia 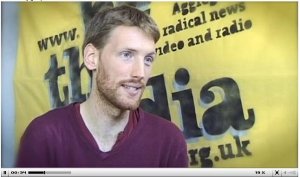 3 thoughts on “Counterpower – an interview with Tim Gee”